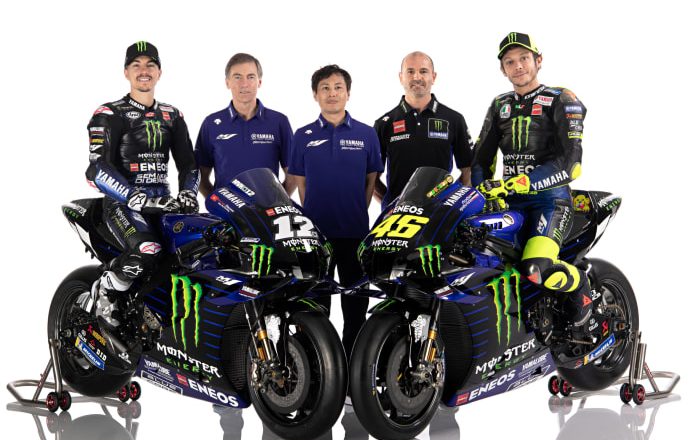 February 6, 2020 – The Monster Energy Yamaha MotoGP Team opened their garage doors at the Sepang International Circuit in Malaysia today to show the set-up for 2020. In the upcoming MotoGP season, the Yamaha Factory Racing MotoGP Team will again be competing with riders Maverick Viñales and Valentino Rossi and continue their close relationship with title sponsor Monster Energy Company.

The Monster Energy Yamaha MotoGP Team staged a team presentation event today at the Sepang International Circuit. To celebrate the start of the 2020 MotoGP season, the team let the media into their pit box for a photo opportunity and held a special press conference.

By opening the doors to their garage for the photo opportunity event, the team offered the media and the fans watching the live stream a good look at the world of Monster Energy Yamaha MotoGP. Factory riders Maverick Viñales and Valentino Rossi were both present and sat on their Yamaha YZR-M1s, making everybody all the more excited to kick off the three-day official 2020 IRTA MotoGP preseason test in Sepang, Malaysia, that will start tomorrow.

Viñales joined the Factory Yamaha crew in 2017 and immediately took third place in the rider standings that year. Though the 2018 season proved to be tough, the Spaniard kept his motivation high and won the race at Phillip Island. He finished that season in fourth place overall, just five points behind his teammate in third position. In 2019, he scored two further Grand Prix victories, one in Assen and one in Sepang, and collected the overall bronze medal once more at the end of the season.

Rossi is famously Yamaha’s most successful rider. This will be his 15th season with the manufacturer since he first joined the Factory Team in 2004. The nine-time World Champion won four championships with Yamaha in 2004, 2005, 2008, and 2009, and is as eager as ever to score GP victories as he enters his eighth consecutive year with Yamaha since his return in 2013.

Yamaha has a long-term global alliance with the team’s title sponsor, Monster Energy Company, based on their mutual passion for racing. A multiple-year title sponsor agreement with the Yamaha Factory Racing MotoGP Team was signed in the summer of 2018 and came naturally, as Monster Energy Company sponsors multiple Yamaha teams (among them the Yamaha Factory Racing MotoGP team since 2013) and riders (including Viñales and Rossi) in various racing classes.

The team is also pleased to announce that throughout the 2020 racing season the bike will continue to feature the slogans of Thai Yamaha Motor Co., Ltd., Yamaha Motor Vietnam Co., Ltd., and Yamaha Motor Philippines, Inc.

Newly-confirmed Yamaha Factory Racing MotoGP Test Team rider Jorge Lorenzo also got a moment in the spotlight. He already made his first kilometres on the YZR-M1 in the shakedown test held on 2-4 February 2020, after a three-year interval. He completed his first test with satisfactory results, and his vast riding experience is expected to be a huge asset to Yamaha’s engineers over the course of year.