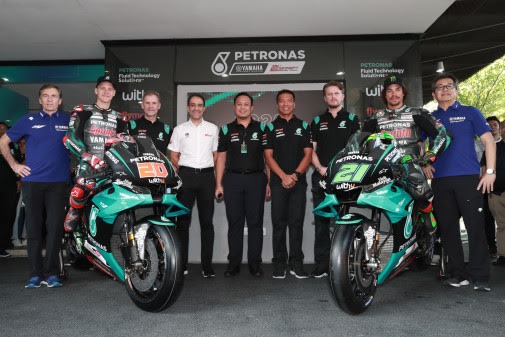 February 7, 2020 – The PETRONAS Yamaha Sepang Racing Team is excited to start its 2020 MotoGP World Championship campaign, with riders Franco Morbidelli and Fabio Quartararo unveiling their 2020 Yamaha YZR-M1 at the team’s home, Sepang International Circuit, on the eve of the official pre-season test at the world-renowned venue.

After a stellar rookie season in 2019, the PETRONAS Yamaha Sepang Racing Team is eager to build on its foundations as the first-ever Malaysian team in MotoGP. Last year saw the team become Top Independent Team, finishing fourth in the overall team standings, with rider Fabio Quartararo taking the Rookie of the Year title and Top Independent Rider honours.

2018 Rookie of the Year Franco Morbidelli and 2019 Rookie of the Year Fabio Quartararo both enter their second season with the squad, eager to deliver even stronger results than those seen last year. The MotoGP team has continuity of personnel in support of the riders.

Featuring an updated look with the latest PETRONAS branding, the team’s Yamaha YZR-M1 will be in Factory-spec for Fabio—who is set to join the factory Yamaha team in 2021—and an A-spec for Franco for the season ahead.

2020 also marks the second year of PETRONAS as the team’s title partner. The impressive results achieved by the team last season are a testament to the Malaysian energy company’s Fluid Technology Solutions that have powered the bikes and riders to six pole positions and seven podiums in its rookie year.