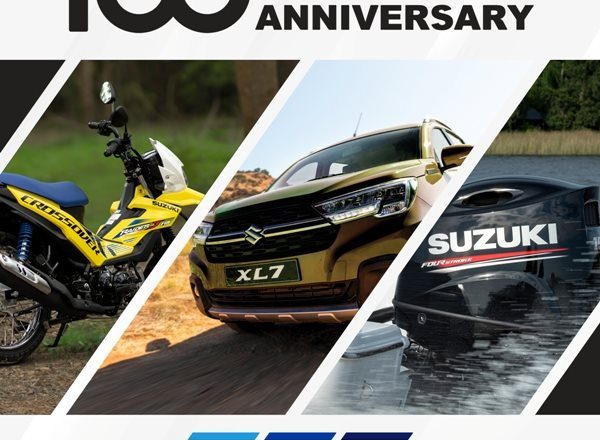 SUZUKI, known as a manufacturer of superior-quality motorcycles, automobiles, and outboard motors, started as a loom weaving company called Suzuki Loom Works in 1902 in Hamamatsu, Shizuoka Prefecture in Japan. Founded by accomplished innovator and inventor Michio Suzuki in answer to a deep sense of mission, the company was built to help the Enshu District weaving industry and the other businesses in the city. Its initial business was providing loom weaving equipment for Japan’s massive pre-war silk industry.

Michio Suzuki’s focus on listening to customers’ needs and the value of hard work–these “monozukuri” or manufacturing principles hinged on craftsmanship–enabled Suzuki to be successful in this initial field. A famous quote attributed to the illustrious founder also encapsulated SUZUKI’s guiding principles, “If the customer needs something, we must do whatever we can to respond. Hard work guarantees success.”

In March 1920, the company was reorganized and incorporated with Mr. Suzuki as president of Suzuki Loom Manufacturing Company, the precursor of the modern-day SUZUKI. Ultimately, Suzuki’s success in the looms business and its principles led the company to diversify into another industry that was crucial to the advancement of Japan: the motor vehicle transport industry.

Enshu winds and the rise of the motorized two wheels: Suzuki motorcycles

The development of Suzuki motorcycles started with an inspiration. Managing Director of Suzuki, Shunzo Suzuki decades back was riding his bicycle against a headwind blowing along the coastal pine forest of the Enshu Region when the thought of a motorized bicycle formed in his mind. His thoughts revolved around building a motorized bicycle that anyone can easily handle and ride. In 1954, a motorcycle with a 90cc engine made its debut — the Suzuki Colleda. The Colleda embodied what the company valued most in producing motorcycles: easy to ride, strong, and long lasting.

The rise of the motorized four wheels: Suzuki automobiles.

This principle of “monozukuri” embraced by Michio Suzuki and his company fueled his longcherished development of automobiles but was unfortunately pushed aside due to the onset of the Second World War. After the war and eighteen years after the initial development began, the automobile development program was finally reinstated and work began in earnest with the determined words of the founder, “We have got to do what we have got to do. The value of the efforts will be that much greater if we push on in spite of limited money and resources.”

Finally in 1955, the passion, the craftsmanship and a deep understanding of what customers desired was realized in Japan’s first automobile the “Suzulight”. Fast forward to today, the dream of Michio Suzuki has continued to fuel the company with the launch of many products that more and more people come to love and cherish.

From loom to outboard motors, the rise of no wheels: Suzuki marine engine.

Suzuki’s reputation as an ingenious and quality manufacturer of small reliable combustion engines eventually led the company to supply another transportation platform, the outboard motor engine for marine transport in 1965 when the “ultimate 4-stroke outboard” was launched. Its global reputation soared even further as the engine became known for better acceleration, better fuel efficiency, and better value.

Suzuki is also in its 35th year in the Philippines with the local subsidiary as the only integrated company carrying Motorcycle, Automobile and Outboard Motor products in Asia.

With 68 dealership groups and a network of 3079 shops, Suzuki Motorcycle has successfully dominated the underbone market with the Smash, touted as the number one selling Underbone in the Leisure category and the Raider R150 acknowledged as the “Underbone King” for being the highest selling model in the Underbone Sport category. Both models have sold more than double their competitors over the years.

Solidifying its presence with a 21.17% increase covering all quarters in 2019, Suzuki Automobile has steadily captured market share. Jumping three places to now becoming 5th in the Philippine market, the boost in sales was the realization of the company’s aggressive efforts throughout 2019, leading to top models Ertiga, Vitara and Celerio becoming some of the market’s most enjoyed vehicles of the year.

The newest addition to Suzuki Philippines is the Outboard Motor or Marine business. With 6 dealerships, it has achieved 205% sales growth in 2019. The division’s Sales and After Sales Teams have left competitors continuously turning heads in the business through excellent service to marine customers.

Here’s to the next 100-years as Suzuki continues to create and innovate for the satisfaction of its customers in the Philippines and all over the world.

We will continue to strive and take part in the community as we are currently experiencing a major speed bump worldwide. As Team Suzuki, our participation goes beyond not just by producing reliable products but being able to assist in continuing the way of life of our people. Stay calm. Stay safe. Stay home.